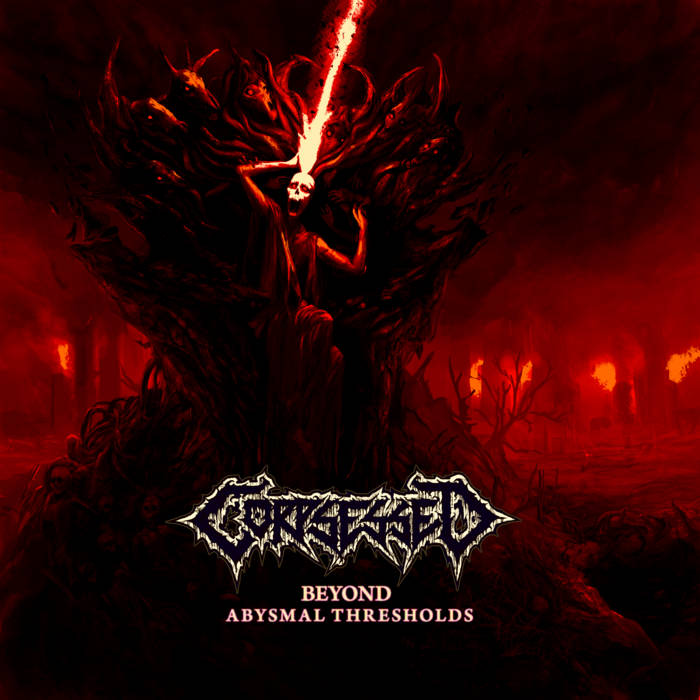 Deathlance I would repurchase a physical copy of this in a heartbeat, especially on vinyl... this completely destroys the previous version. Well done.

What is done, is done? Should a corpse be left to rot in peace?

With our debut full-length album "ABYSMAL THRESHOLDS" we never felt the production was particularly successful in conveying the ideas the band had, or what we sounded like live. Even though there are not many remix albums that ever top the original, and even releasing this experiment divided the opinions within the band, here you have it.

Retaining what could be salvaged from the original tracks (the drums, bass, vocals, synths and lead guitars) with a proper new mix, and adding new rhythm guitars, a revised tracklist order and including ideas that were previously omitted...

"BEYOND ABYSMAL THRESHOLDS" is and is not the same album as before, and thus a new title was chosen for it, To better represent what this era of the band was *supposed* to sound like.

Is it perfect? No. Nothing in life is.

"Abysmal Thresholds" was originally recorded in June - September 2013 by Matti Mäkelä
"Beyond Abysmal Thresholds" is a remix, remaster and a partial re-recording of this album,
that was done in the later half of 2019.
Original version release date 4.2.2014
Artwork by Danille Gauvin.
CD version exclusively by Dark Descent Records, 2014
Vinyl version by Dark Descent and Me Saco Un Ojo, 2011
This new version was released digitally on 11.12.2019
The original can be listened at:
darkdescentrecords.bandcamp.com/album/abysmal-thresholds

a combination of suffocating and crushing DOOM METAL, ghastly ominousness of BLACK METAL and HORROR Movie soundtracks, weaving it all within the style of Rotting early 90s style DEATH METAL, especially in the Finnish tradition....
This is what CORPSESSED are all about, a 5-piece band spawned from putrescent slime in 2007 in Järvenpää/Finlan ... more

Bandcamp Daily  your guide to the world of Bandcamp